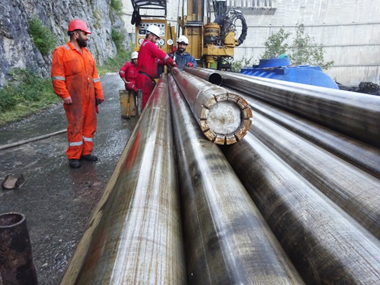 The field trip from August to end of October 2020 included a variety of installations and measurements concerning borehole drilling for stress analysis, installation of seismometers to detect the tectonic and induced seismicity, field campaigns for regional deformation detection and many more.

At the Enguri dam site drilling included the borehole KIT-1 (final depth 229 m), KIT-2 (final depth 307 m), KIT-3 (25 m), KIT-4 (70 m) and Shtolna (approx. 20 m). The borehole KIT-1, KIT-2 and KIT-4 had been fully cored. This results in a total of more than 600 m of drill cores which are stored at the site (thanks to the owners of Hotel Enguri). Borehole KIT-1 successfully drilled the “branch fault” of the Enguri system which was one of the drilling goals. The cores within the fault zone are significantly broken whereas rather intact cores could be obtained from shallower and deeper sections.

Structural analysis of the cores in the field could be completed in October 2020 for drillhole KIT-1.

Drilling of the boreholes Shtolna, KIT-2 and Kit-4 was rather smooth, however, KIT-1 and KIT-3 had severe drilling problems (see below) mostly because of the loss of drilling fluid due to the location of the drillhole at the slope of the Enguri river, which was expected. This was challenging for the drillers and we are very happy that the drilling crews could manage the drilling.

The televiewer logging could be performed in the boreholes KIT-1, KIT-2 and Shtolna and several other shallower drillholes located at the site, in sections filled with water. With the televiewer recordings the fractures at the borehole wall as well as stress induced features such as borehole breakouts and drilling induced fractures can be determined. Those are the base for the stress orientation determination. KIT-2 could be recorded by the acoustic televiewer for the whole depth range, borehole KIT-1 in the depth intervals from 112 - 143  and 160 - 209 m.

Field work is exciting, but some works had been quite challenging. Here we also provide some impressions of problems which we could successfully overcome:

KIT-1 was a borehole hard to drill because it is crosscutting a fault zone. Sometimes it was hard to retrieve the drillcores from the core catcher, but nevertheless the drillers in the end could provide the full length of drill cores.

KIT-1 was also problematic for the logging and the installation of the seismometer.