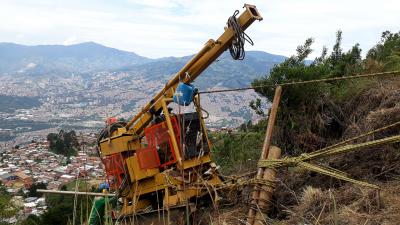 In October, the project team began drilling to collect soil samples and install soil sensors for the early warning aystem for slope movements in informal settlements in the steep mountain slopes of Medellín.

The project area is located on a layer of loose rock up to about 50 metres deep above weathered dunit rock, which is particularly prone to landslides and shows numerous traces of previous slope movements. The boreholes are intended to provide information about the geological composition of the subsoil and the groundwater in order to be able to make a differentiated assessment of the threat to the settlement. Initial observations (e.g. open cracks in the rock and broken rock sections) indicate active movements in the slope at a depth of at least 20 m.

Over the coming weeks, the soil samples will be carefully examined in the laboratory with regard to their mechanical and hydrogeological properties. In addition, the first water level, slope and deformation sensors were installed in the boreholes at depths of up to 50 metres. These are the first component of the early warning system, which is set to be installed by mid-2021 as part of the Inform@Risk project in Medellín. The next step will be the installation of an approx. 100 metre long pilot section of the temporally and spatially high-resolution horizontal shear and strain sensors (Continuous Shear Monitor and Wire Textensometer) in the ground. In view of the continuing travel restrictions imposed by Covid-19, this will require a transfer of technology and expertise for the installation of the early warning system to experts on site.

In developing the early warning system, the Inform@Risk project has focused its attention on both the technical concept and on ensuring that the markings and design for the geo-sensors, which are located in public spaces, encourage the people living on site to identity and feel a sense of responsibility for the system. They were therefore intensively involved in the planning process right from the start and informed about all steps. A particular challenge for the coming months will be to resume the workshops with the residents of the settlement after the Corona Lockdown in order to further develop and test the system in a participatory process.