At former uranium mining sites in Kyrgyzstan, Tajikistan, Uzbekistan and Kazakhstan, uncontrolled radioactive contamination threatens transboundary rivers in the region due to natural hazards such as flooding or landslides. In the DUB-GEM project, an association of German and Central Asian partners, an exploration technique installed on a drone is being developed which is used for rapid recording of the radioactive pollution situation in the vicinity of these locations.

In the environment of radioactively contaminated locations of the former uranium mining area in Central Asia, uncontrolled entry of radioactive contaminants into transboundary rivers of the region, caused by georisks such as landslides or earthquakes, is a real threat. The spatial exploration of former uranium mining sites to measure contamination is carried out with the aid of so-called gamma spectrometers. Up to now, this usually took place on the ground (e.g. on foot). However, exploration is often tedious and burdensome for the processor, especially in difficult, mountainous terrain. An alternative is helicopter-based systems. These are efficient and can typically be used in any terrain, but they are very costly and logistically complex. They are therefore only used in exceptional cases. The DUB-GEM (Development of a UAV-based Gamma Spectrometry for the Exploration and Monitoring of Uranium Mining Legacies) project aims to develop a drone-based exploration method that benefits from airborne systems with significantly reduced operational costs.

The development work in DUB-GEM should lay the foundations for future commercial use of an efficient exploration method as part of the planned rehabilitation of radioactively contaminated sites in Central Asia. The Environmental Remediation Account for Central Asia (ERA), funded by the European Bank for Reconstruction and Development (EBRD), is providing the financial basis for this rehabilitation project.

The use of relatively small gamma spectrometers on drones to investigate contamination with low-level radioactive material has not yet been extensively studied. In DUB-GEM, the development of two competing exploration methods is planned, as the expected measurement distance between the survey surface and drone lies exactly in the transition range of the respective measurement distances of the exploration methods previously used on the ground or in the air.

The results of the development work should provide information on which of the exploration methods to be developed - near the ground or at high altitudes - should be used preferably in the future or whether both methods may be used in a complementary manner. Findings on efficiency gains in exploration and data quality compared to established methods are also expected. Specifically, the project is investigating the selection of suitable gamma spectrometers as well as the selection, specification and construction of the drone to be used. In addition, central flight parameters, optimised flight routes and operating parameters for drone deployment will be derived and detector-specific evaluation routines developed.

First, the two exploration methods will be calibrated with aerial surveys in Germany and flight strategies will then be defined. Afterwards, selected areas will be flown in the partner countries and the two developed methods compared in terms of their overall performance in the field.

The exploration method to be developed within the scope of the project allows for the demarcation and quantitative characterisation of risk areas for radioactive contamination. Finally, the data collected in the project will be integrated into the environmental information system to be developed in the CLIENT-II project TRANSPOND.

The Federal Institute for Geosciences and Natural Resources (BGR) is coordinating the project on the German side. The company Third Element Aviation (3EA) from Bielefeld will provide the required drone for carrying the gamma spectrometers, thereby expanding their product portfolio to include drones with a carrying capacity of up to 25kg. The company IAF-Radioökologie GmbH (IAF) from Radeberg is responsible for one of the two planned parallel development lines for drone-based gamma spectrometry. BGR is responsible for the second planned development line.

The companies involved in the project are securing medium- and long-term market opportunities in the partner countries as well as opportunities for further expansion of their presence in Central Asia. Conversely, the Central Asian partners will benefit from German know-how and will be better able to meet their obligations in the decontamination and monitoring of restored properties, e.g. after extreme events. Overall, the knowledge gained as part of the joint project can also be used in other regions for similar problems and other applications. It will therefore contribute to further development of the decontamination of radioactively contaminated sites in Central Asia. 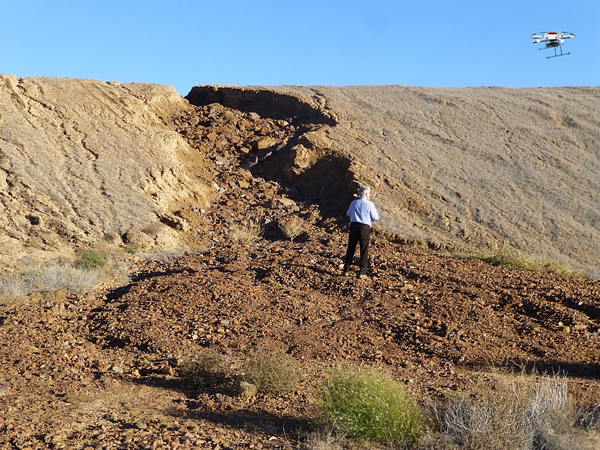 Under the leadership of the Federal Institute for Geosciences and Natural Resources (BGR), a German consortium is planning a drone-assisted method for exploring uranium mining legacies in Central Asia in cooperation with partner authorities from Kyrgyzstan, Tajikistan, Uzbekistan and Kazakhstan.