Strengthening the Resilience of Informal Settlements against Slope Movements

Worldwide, the number of people at risk in landslide areas is increasing due to uncontrolled urbanisation and climate change impacts. The extent of relocation required usually overwhelms municipalities and administrations with limited financial resources. In the Colombian city of Medellín, self-built neighbourhoods stretch over mountains whose slopes give way and bury entire settlements. The German-Colombian research project Inform@Risk, together with residents of the informal settlements of Medellín, is developing a low-cost and low-maintenance early-warning system.

Worldwide, the consequences of climate change and uncontrolled settlement development are driving up the number of people threatened by landslides. Early-warning systems provide an effective alternative to relocating people in landslide-prone areas. However, their use in poorer regions has been limited due to limited accuracy and high costs. The Inform@Risk joint project aims to develop a cost-effective and site-specific early-warning and evacuation system specifically adapted to the complex spatial and social conditions of informal settlements.

The development and test site for the early-warning system is the city of Medellín in Colombia, where currently around 100,000 people live in endangered areas. A dense network of geosensors, which can detect the smallest slope movements and enable precise forecasts for warnings, is to be installed for the first time in an informally populated area.

The German team, which includes experts from geotechnical engineering and urban and landscape planning, will work with a Colombian team of disaster management experts, city planners, social workers, citizens' initiatives and local residents.

The project collects data at the level of the city region, the neighbourhood and the district. The early-warning system will be implemented and tested with the local people in each example neighbourhood and district. Data collection will be done by cost-effective and easy-to-use sensor systems that collect data on subterranean processes on landslide-threatened slopes. The combination with an automated analysis software is intended to improve the reliability and user-friendliness of the system. In addition, information from smartphone-based crowdsourcing, remote sensing data and social media will be used to link technical expertise more closely with the experience of residents of informal settlements. The sensor elements, evacuation routes and protected areas will be integrated so they are clearly visible in the public space of the settlements as multifunctional usable elements that are present in the everyday life of the people. They should strengthen people's sense of security and personal responsibility.

Inform@Risk follows the methods of real laboratories where experts and locals develop solutions together for tailor-made warning and evacuation strategies in a collaborative and transdisciplinary decision-making process.

Recommendations for action for an integrated early-warning system

During the training and testing phase, the newly developed early-warning and evacuation system will be tested in the district for one year and then evaluated. From the results, the project participants hope not only to shed light on technical factors such as the functionality, cost-efficiency and precision of the low-tech approach. The acceptance of the overall system by the residents and the sustainability of the participation process are also important for the project.

Involving residents in the development, construction and maintenance of the early-warning system, as well as continuously updating data with the help of geo-information voluntarily provided by local residents, is an important building block for increasing the acceptance and safety of the system. Software and data will therefore be publicly available and transferable. Recommendations for action for the transferability of an integrated early-warning system will be developed based on the findings of the project. This will allow local governments and communities to conduct proactive and site-specific risk management.

The disaster risk management authorities in Medellín intend to integrate the early-warning system prototype in practice and transfer it to other locations in the Andean region. The long-term goal is to develop a marketable, cost-effective and day-to-day system that will be used preferentially in financially weak growth areas of global urbanisation. 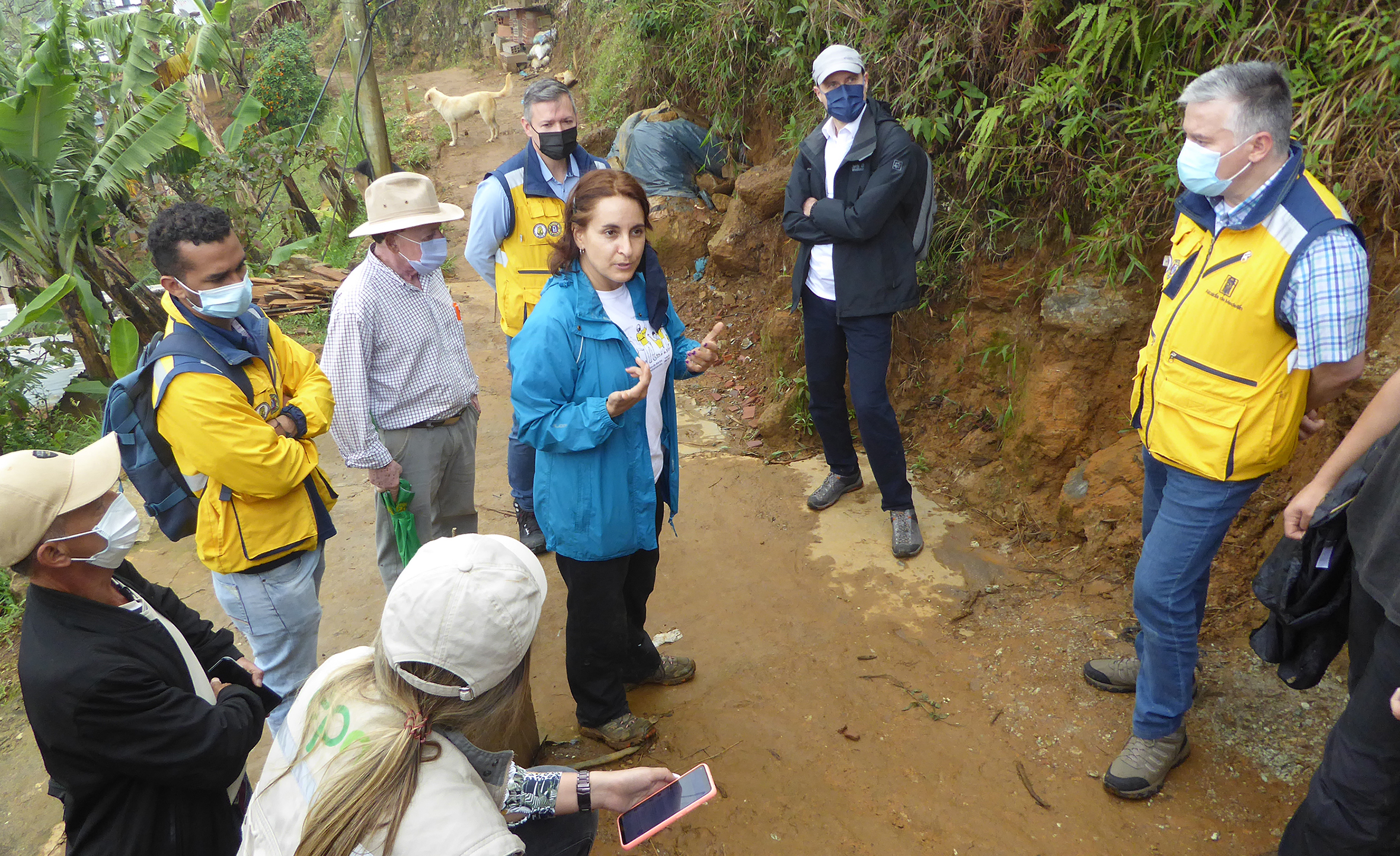 At the end of November 2021, the project teams from Leibniz Universität Hannover, TU München and the company AlpGeorisk travelled to Medellín (Colombia) to assess the status of the installation work of the newly developed sensor technology for slope movements and its integration into the public space of the informal settlement. For the first time since the beginning of the pandemic, face-to-face meetings with the Colombian partners and local people were possible again in order to prepare for the subsequent takeover and continuation of the system after the end of the project in December 2022. 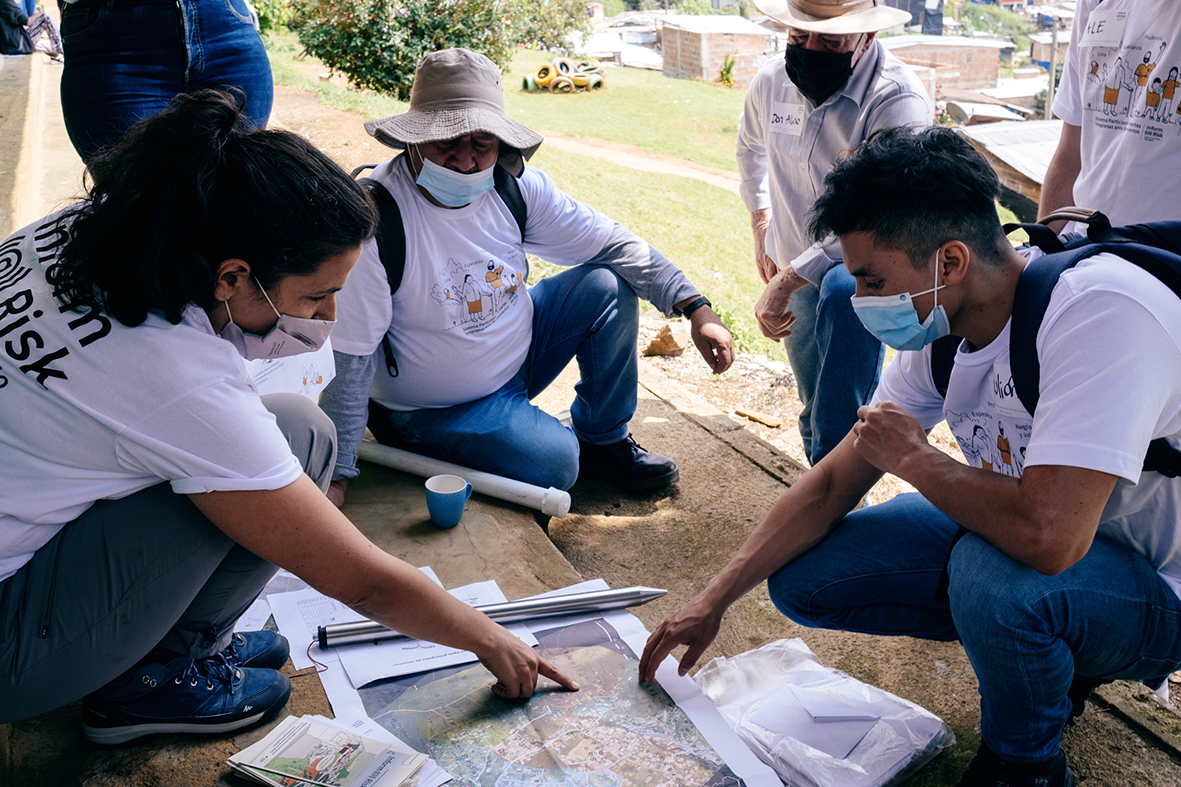 Since August, the test installation of the Inform@Risk early warning system for slope movements has been carried out in Medellín, where around 100,000 people currently live in areas at risk of landslides. The work is accompanied by information campaigns and workshops with local residents to increase acceptance and responsibility for the system. 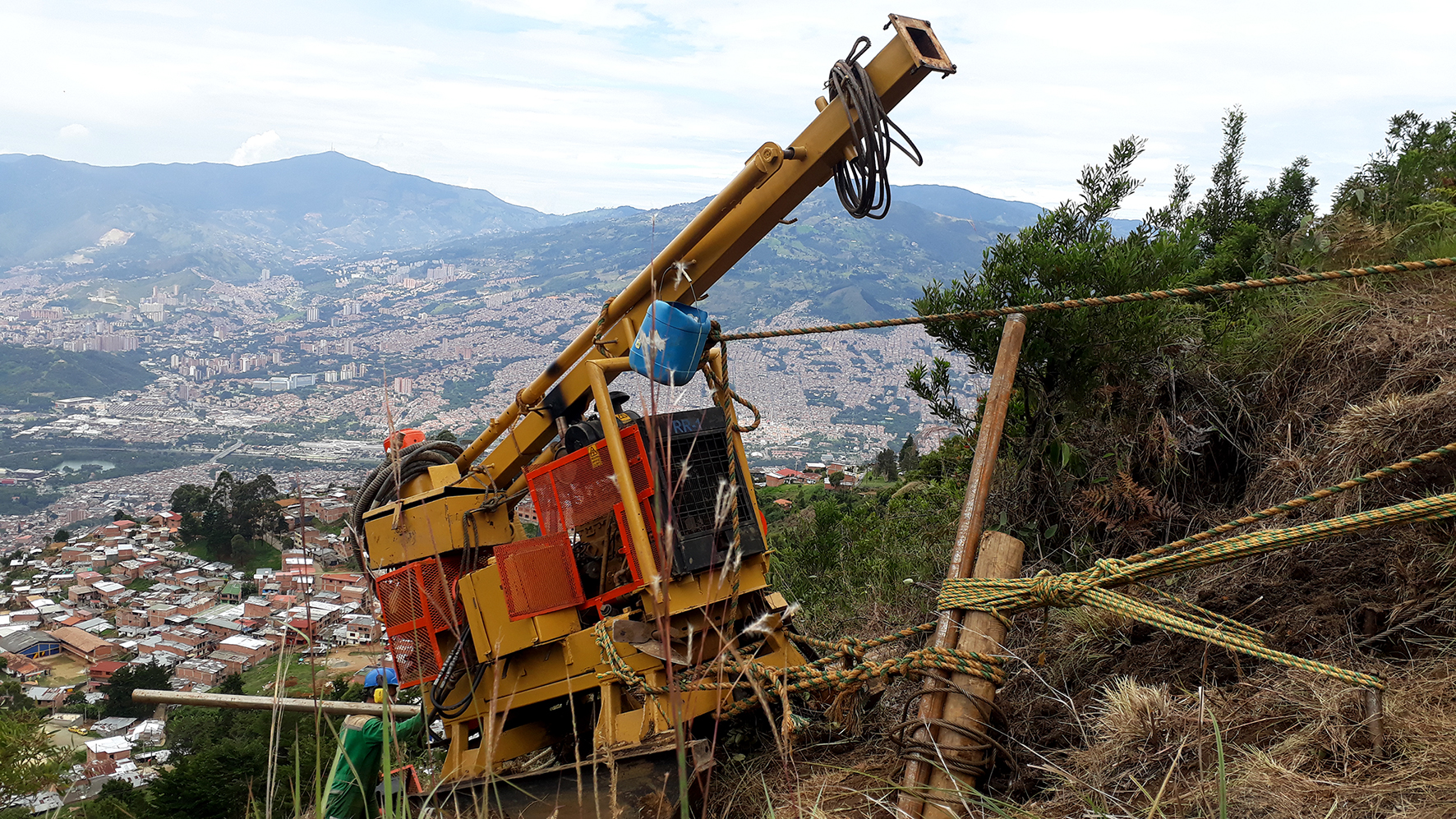 In October, the project team began drilling to collect soil samples and install soil sensors for the early warning aystem for slope movements in informal settlements in the steep mountain slopes of Medellín. 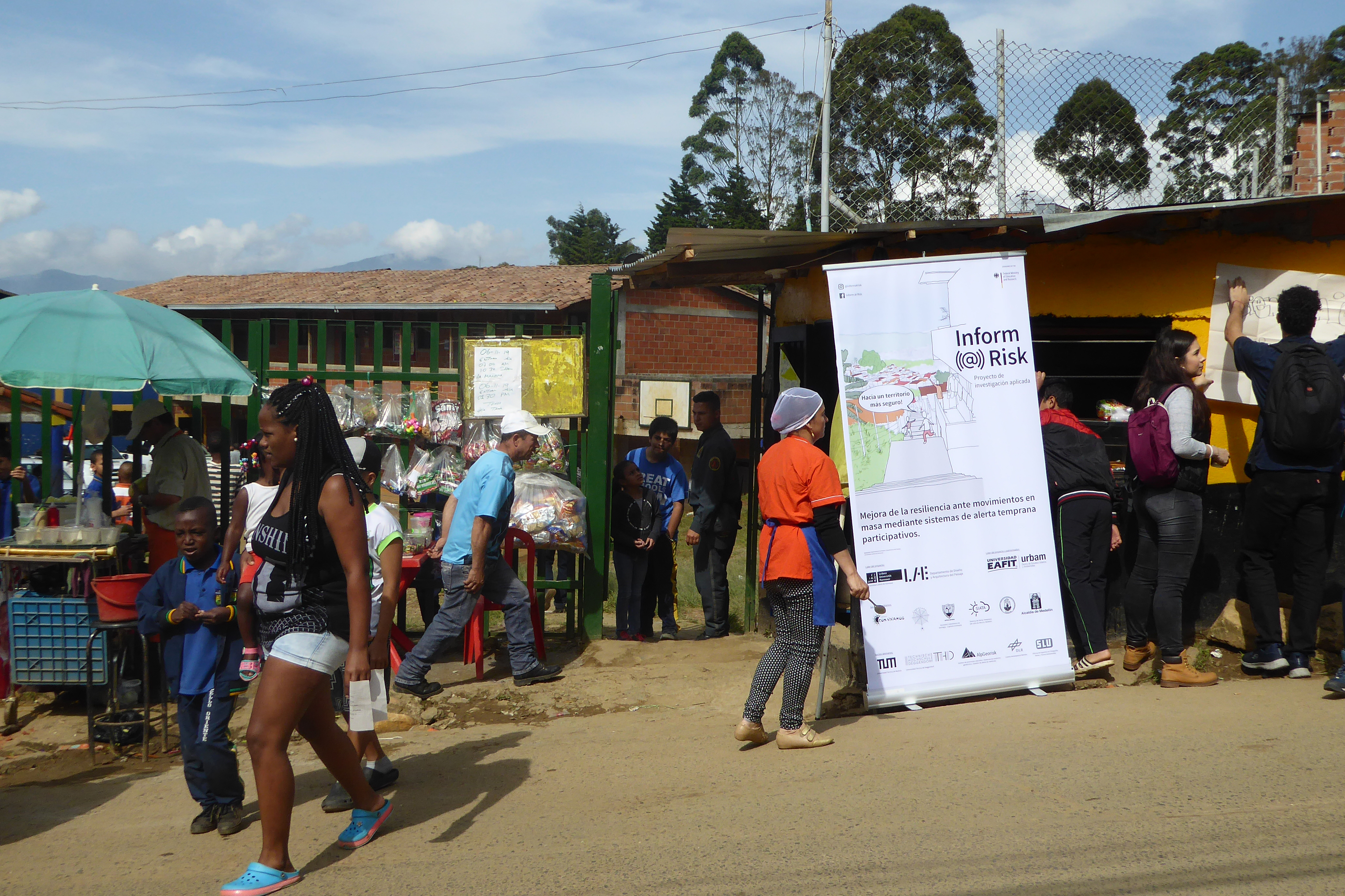 From 4th to 8th of November, almost 30 German and Colombian project partners met to present initial research results and to organise joint workshops with all participants on site.