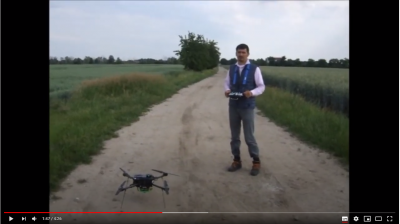 The Leibniz Institute of Agricultural Development in Transition Economics (IAMO) has produced a video tutorial presenting the advantages of using drone technology in agriculture as part of the CLIENT II project KlimALEZ.

Globally, April 2020 was the warmest April in a long time, matching only April 2016. In Central Asia, as in many other regions around the world, another drought would result in further significant damage the agricultural sector, which has already suffered severe yield losses in recent years.

At international level, digital technologies are becoming a crucial tool in the development of support mechanisms that can help to address increasing climate risks.

As part of their project activities, IAMO researchers have produced a video tutorial to introduce specific target groups in Central Asian to the use of drones in agriculture. In the video, Dr Lena Kuhn, Dr Ihtiyor Bobojonov and Shovkat Khodjaev report on their experiences in using drones to estimate vegetation growth and yield. They recently published a version of the video in the Uzbek language with English subtitles online and it can be viewed here.