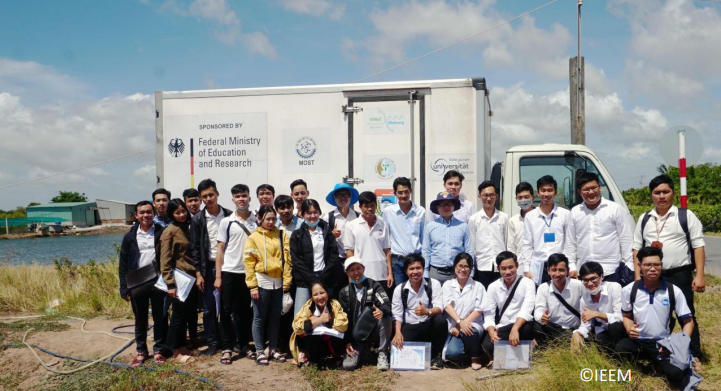 ViWaT: research results from the Mekong Delta are transferable to many regions worldwide

Wars, salinization and climate change the demand for small dual water plants. Given that water is becoming scarce in more and more regions worldwide, technologies that were originally only intended for arid regions are also becoming relevant in Germany. IEEM, the Institute for Environmental Engineering, has developed a new concept for small waterworks as part of a project funded by the BMBF. This is intended to help where one natural water source alone is no longer sufficient.

The small waterworks should be fed from several water sources ("multi fed") and be able to process groundwater, surface water, rainwater and, if necessary, treated wastewater, depending on the climate, current availability and demand. Since most of the supply water is used for washing, cleaning etc., it is worthwhile to produce service and drinking water in parallel ("dual water") whenever there is a shortfall of clean natural water. Therefore IEEM has developed a technology called MFDWS (multi fed dual water system) and tested it at three pilot plants in the Mekong delta, in cooperation with the industrial partner Wilo/Martin Membrane Systems. Project leader Prof. Dr. mult. Karl Rudolph expects growing demand for this new type of system: "The need is not only for remote settlements in coastal regions and river deltas but in all areas where central systems do not work. In addition to countries plagued by war and turmoil, this also includes those cities where the public water supply fails or does not deliver reliably - whether for technical reasons or simply due to state failure."

After decades with overexploitation of groundwater reserves and severe droughts, but also due to increasing polluted wastewater discharges into water bodies, there is a shortage of clean raw water in many places. There, the piloted small water plants produce supply water from low-polluted rainwater, frequently polluted groundwater and heavily polluted surface water from a river or canal. As far as possible, groundwater is to be conserved because the available reserves are running out and the lowering of groundwater levels in the Mekong delta will lead to permanent salinisation of the soils and soil subsidence with enormous damage to structures and nature.

That is why a variable concept was developed under the ViWaT-Operation project. Depending on the season, location and current conditions, the comparatively clean rainwater is used as the first choice. As the second choice, depending on the current demand situation and pollution, surface water is used and only after that groundwater as the third choice, to save as much of the groundwater reserves as possible. In addition, wastewater can be treated for water reuse. This has been piloted successfully for a shrimp farm to re-fill ponds for breeding sensitive baby shrimps, which can only survive in water of high quality.

For the small waterworks, automation-capable mechanical-physical processes were used from the very beginning and chemical or biological components were dispensed with. The heart of the plant is an ultrafiltration module with an upstream protective filter. For operation under robust working conditions, the unit already prepared for remote monitoring and maintenance was used, the so-called "Aquacube" from Wilo/Martin Membrane-Systems.

Due to the disadvantageous combination of the natural water resources with iron/manganese, salt and organic contaminants (measured as TOC), an additional pre-treatment system had to be installed at two of the three pilot sites. This pre-treatment consists of a deliberately simply constructed free-air drip aeration with a gravity downflow multi-layer filter, which was manufactured by local craftsmen according to a design template from IEEM.

To desalinate the raw water during dry periods, it was not possible to avoid installing a reverse osmosis system at two of the three sites for post-purification of the otherwise clean water from the Aquacube. The high operating costs due to this reverse osmosis (RO) system are reduced by making potable water available with a separate tap for potable purposes only and offering domestic water (without downstream RO treatment) through another tap (see photo). Thus, the RO system runs only when the salinity would otherwise exceed the permissible values, and only for the partial flow that is called up for drinking water. This constellation has proven itself in operation.

Because similar needs exist or are emerging not only in the Mekong Delta, but also in many other regions of the world, IEEM expects growing demand for this new type of water supply plant. In these places, consumers who depend on a reliable water supply like to have their decentralised small waterworks - even if only to be able to supply themselves autonomously in the event of a malfunction. For decades, in many developing and emerging countries, every better hotel would have its water reservoir for safety to bridge supply interruptions. The larger top hotels would often maintain their own drinking water supply , which the hotel manager and his customers could trust, at least as precaution “just in case”.