DECIDER - Decisions for the Design of Adaptation Pathways and the Integrative Development, Evaluation and Governance of Flood Risk Mitigation Strategies in Changing Urban-rural Systems

As a result of strong urbanisation processes and the effects of climate change, the IPCC is warning of a strong increase in the flood risk in coastal megacities, especially in Asia. Ho Chi Minh City, Vietnam's economic engine and largest city, is a serious example of this and one of the most affected coastal cities in global comparison. For the development and implementation of sustainable adaptation paths, the German-Vietnamese project DECIDER is creating an integrated assessment of future risk trends at the interface of climate change impacts, urban growth and socio-economic upheaval as well as a comparative assessment of potential measures for reducing flood risk.

Adaptation paths: The path is the destination

Floods are becoming an increasing problem for the sustainable development of cities and regional economies. In Vietnam and especially in the Greater Ho Chi Minh City region, the forecast increase in pluvial and fluvial flood events, coastal storms and sea-level rise is a cause for concern. Notwithstanding these increasing risk trends, and faced with deep climatic and socio-economic uncertainty, the Vietnamese authorities and other stakeholders are struggling to develop, analyse and evaluate appropriate and workable adaptation measures. While various options are currently being discussed by the authorities in Ho Chi Minh City, the decision-making process is hampered by significant knowledge gaps and a lack of practical planning aids.

The goal of DECIDER is the knowledge-based design, evaluation and implementation of dynamic adaptation paths in the context of increasing flood risks in changing rural-urban systems. The project is using Ho Chi Minh City and its hinterlands as a pilot project. However, the transfer of results, methods and instruments to coastal cities shaped by similar pressures of adaptation such as Bangkok, Dhaka or Jakarta is also a goal.

On the one hand, DECIDER is developing and testing innovative methods for estimating future risk paths. Not only future changes of flood hazards are being taken into account, but urban growth and thus the exposure of future infrastructure is also being considered. Changing patterns of social vulnerability are also being observed. For this purpose, qualitative scenario methods are being combined with quantitative modelling. On the other hand, the project is developing and testing innovative and integrative methods for multidimensional evaluation of different adaptation options. These should go beyond conventional and short-reaching concepts such as purely economic cost-benefit calculations. Aspects of social acceptance, political feasibility or ecological compatibility are increasingly being represented in order to overcome current dead-ends in adaptation governance.

DECIDER is relying on transdisciplinary cooperation between Vietnamese and German partners. A major concern of the project is the integration and development of previously eclectic perspectives on established adaptation options (e.g. large-scale solutions such as dikes vs. decentralised measures at the building level, green vs. grey infrastructure, formal vs. informal adaptation mechanisms). The project will provide a coherent framework for comparative analysis and evaluation of the strengths and weaknesses of different options. The evaluation methods and results will be transferred to a decision-making support tool. Information about adaptation options is not yet bundled. Instead, stakeholders act on the basis of their own logic. Synergies or conflicts between specific adaptation measures are largely unknown up to now. The decision support tool (DST) is designed to help flood and urban planning planners, policymakers, consultants and non-governmental organisations to design adaptation pathways by providing and evaluating information on (future) flood hazards, vulnerabilities, possible adaptation options, their legal frameworks, impacts, costs and possible synergies and conflicts.

Cooperation with the users

To ensure sustainable use, the DST is being developed in cooperation with future users such as public authorities, companies and civil society. DECIDER is also allowing for the application of the DST in other cities with similar adaptation pressure and is specifically promoting the transfer by appropriate measures during the project.

In this way, DECIDER can make a sustainable contribution to the successful reduction of flood risk in coastal cities worldwide. The project is thus supporting the implementation not only of global disaster reduction objectives, but also of climate change adaptation and, ultimately, sustainable development in general.

CLIENT II projects in Vietnam network at event in Bonn 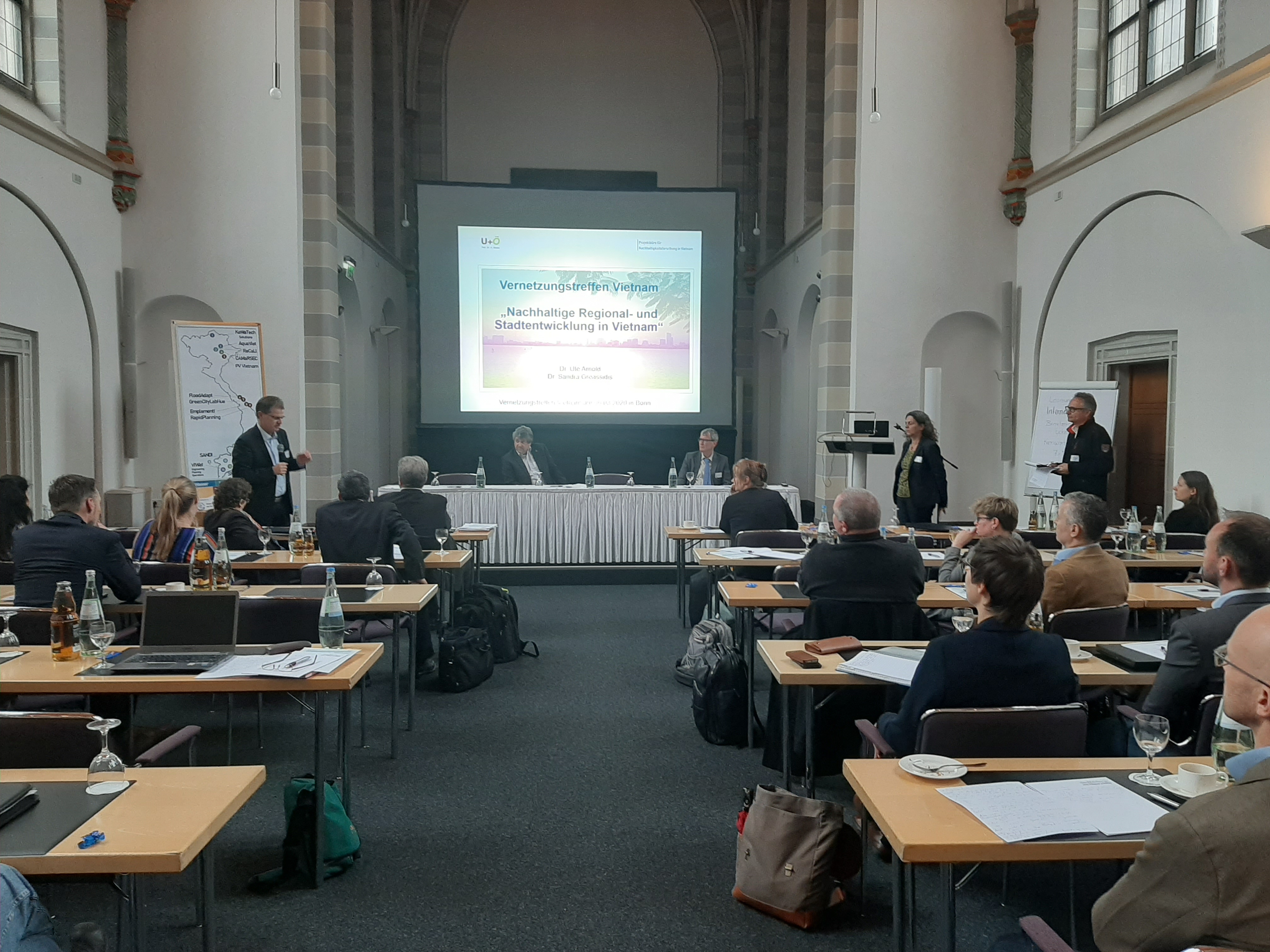 On 5 March 2020 a number of BMBF-funded projects in Vietnam met up for a networking event in Bonn.